The electron beam extracted from a field emission source in a microscope column, with a known narrow range of kinetic energies, scatters due to interaction with the specimen material and can be used to form images and perform spectroscopy alike. As expected, a majority of the fast traveling electrons interact elastically with the material i.e. they lose negligible energy in their dynamic interaction with atoms that make up the material. The rest of the electrons lose a finite amount of energy during their interaction with core-shell and valence electrons and while facilitating mechanisms such as vibrational excitations, inter and intra-band transitions, guided light modes, and Ćerenkov radiation i.e. they interact inelastically with the material. 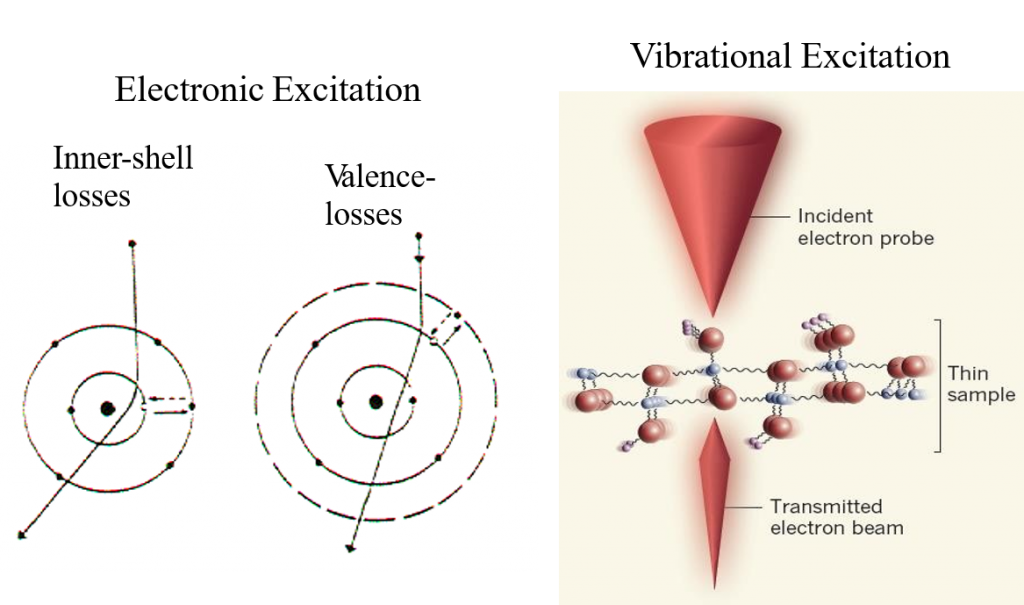 The energy lost by incident electrons during various inelastic interactions with the material are characteristic of the chemical composition and bonding arrangements in the material and can be used for spectroscopic studies. EELS, the study of energy-loss due to inelastic scattering of electrons can in principle be used to measure atomic composition, chemical bonding, valence and conduction band electronic properties and surface properties. With the high spatial resolution of an aberration-corrected electron microscope, we can detect changes in the local chemistry of the material, which can give us a fundamental understanding of the scientific processes that manifest at the atomic scale in the material. For example, the difference in composition and electrical conductivity in the grain-interior and the grain-boundary in Ca, Gd and Pr-doped CeO2, the change in oxidation state of Ce in Pr-doped CeO2 from Ce4+ to Ce3+, the presence of band-gap states and guided light modes in TiO2, detection of vibrational excitation modes due to hydrate and hydroxyl species in Ni(NO3)2.6H2O and Ca(OH)2 respectively are some of the fundamental work done in the research group with EELS.