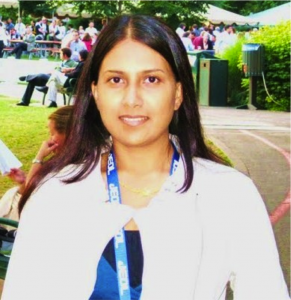 I started my work on TiO2 nanotubes in Dr. Crozier’s research group in 2009.  Due to low cost, high availability, benign chemical properties, and activity in UV range, TiO2 has become popular candidate for photocatalytic studies. We have synthesized nanotubes with controllable parameters supported on Ti foil, as well as free standing tubes with both ends of tubes open. It has been shown that photocatalytic properties can be influenced by the phase and the structure of the oxide. Hence, it is important to investigate the optimization of stable combinations of phase and morphology at various annealing temperature conditions. We have studied the tubes at various temperatures in both ex- and in-situ Transmission Electron Microscopy (TEM). The structural and phase characterization of tubes has been investigated by high resolution imaging, selected area diffraction (SAD), electron energy loss spectroscopy (EELS), and Inverse Fast Fourier Transformation (IFFT) analysis.

To enhance the catalytic activity of TiO2, it is doped, or functionalized, with different metal systems. Since most of the well-aligned arrays of nanotubes are supported by Ti foil, transportation of the dopant metal atoms is limited. In most popular impregnation techniques tubes also suffer damage from post heat treatments. In a separate study, we have successfully inserted highly mono dispersed Pt nanoparticles of ~ 2nm, in tubes. The particles were identified by Energy Dispersive X-ray spectroscopy (EDS) in TEM while determining their spatial and size distribution via Scanning Transmission Electron Microscopy (STEM).

1. Individual and Combined Roles of CTBN and Fly Ash in Epoxy System under Compression: Correlation between Microscopic Features and Mechanical Behavior, Journal of Reinforced Plastics and Composites, 2005, 24, 299-313

6. Dispersing Pt metal nanoparticles in supported and freestanding TiO2 nanotube arrays with a one step photoreduction approach, manuscript under preparation

2. Effect of TiO2 Nanotube Structure on Photocatalytic Production of Methane, Microscopy and Microanalysis, 2010

6. In-Situ Observation of W-Deposition in TiO2 Nanotubes, Microscopy and Microanalysis, 2012