Photocatalytic generation of solar fuels such as hydrogen is a potential path for solar energy utilization. Hydrogen can be generated by water splitting and can be directly employed or used to produce other fuels such as hydrocarbons via Fischer Tropsch processes or direct reduction of CO2. This approach is attractive because it not only captures the energy of the sun but allows it to be stored for future use in the form of fuel molecules. Fuels can be generated by employing biological systems (including plants and microorganisms) to harvest solar energy to produce biomass for fuel production. An alternative is to develop inorganic materials based on nanostructured catalysts for fuel production. Such catalysts may have certain advantages compared to biological systems since they may have simpler structures and may be more stable over time. Moreover, such an approach does not require the use of arable land and it could function in environments which are hostile to biological systems (such as harsh desert environments). Finally, the fuels generated may be cleaner and require substantially less fuel processing compared to biomass conversion schemes.

Photocatalysts must be able to efficiently harvest incoming solar radiation, transfer charge to the surface and then transfer charge to adsorbed molecules to catalytically create fuel molecules. Each of these steps must be optimized in order to increase the efficiency of the process. However, the current generation of photocatalysts lack long-term stability and do not reach the DOE benchmark efficiency of 10% required to develop a viable technology. To resolve these problems, many fundamental materials questions on the nature of the processes taking place during photocatalysis must be addressed. An important step in developing an improved understanding of the functioning of inorganic photocatalysts is to determine structure-reactivity relations. What happens to the materials under reaction conditions and how do structural changes correlate with catalytic activity?

We are investigating the atomic level structural changes that take place in photocatalysts under photoreaction conditions. We have designed and built a modification to two environmental TEMs to allow photon irradiation of samples in the presence of reactive gases. Using our instrumentation and these model systems, we have observed changes taking place on the surface of oxide nanocrystals under conditions relevant to photocatalytic water splitting. The fundamental information derived from this research should point the way forward for developing more efficient inorganic photocatalysts for solar fuel synthesis.

Ben Miller designed and built an addition to the Tecnai F20 environmental TEM at ASU, which allows light illumination of the sample in situ. This system was used for studies of solar energy related materials.  A broadband, high brightness light source, the Energetiq EQ-99 seen below, was selected because it mimics the solar spectrum, and can be focused into a small spot on the TEM sample. 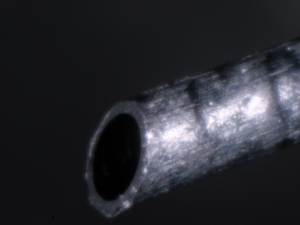 The fiber tip, which is cut at an angle of 30 degrees, and positioned within a few mm of the TEM sample.

This system is capable of illuminating a small area of the TEM sample with an intensity 10x that of the sun on the Earth’s surface. The illumination mimics the solar spectrum, which is ideal for solar energy research, and can also be filtered to much smaller wavelength ranges for specific experiments in basic materials research.

Qianlang Liu designed and built another in situ light illumination system for an aberration-corrected FEI Titan ETEM. In this case, the optical fiber is guided by a fiber holder using the objective aperture port of the microscope. As shown below, a fiber holder is built to support and maintain the curvature of a custom made fiber optic (also has a 30 degree cut at the end). The TEM sample sits in a heating holder needs to be tilted in order to maximize the received light intensity. 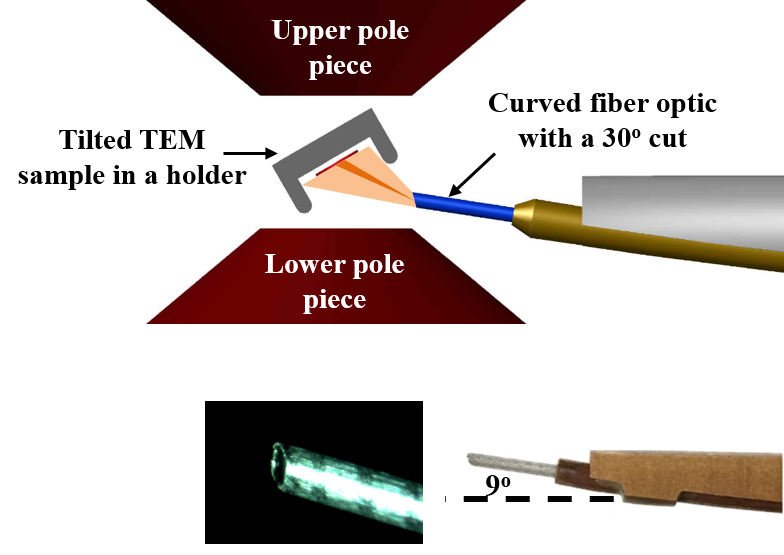 Ultraviolet (UV) light photocatalysts generally consists of semiconductors that have bandgaps larger than 3 eV. Titania (anatase) and tantalum oxide based model photocatalysts are used to study the reaction and deactivation mechanisms because of their relatively simple structures and compositions. They can be functionalized with metals and other semiconductors to enhance their catalytic activity. The titania system is an excellent model for exploring the new fundamental nanoscience that may emerge from our novel in situ microscopy approach. The tantalates are the most active of all photocatalysts for water splitting which greatly facilitate the study of structure-reactivity relations.

To increase the solar-to-hydrogen efficiency of photocatalyst systems, visible-light absorbing semiconductors that are stable in water and have the proper energy band alignments to split water must be identified and studied. Two visible-light water splitting systems that are of interest to our research group are: (i) graphitic carbon nitride and (ii) titania-supported ceria. Graphitic carbon nitride (g-CN) has a bandgap of ~2.7 eV and consists of graphite-like sheets of alternating nitrogen and carbon rings. We are applying low-dose TEM and EELS to g-CN’s to characterize the physical and electronic structure of this sensitive material to understand its effects on photocatalytic activity. Titania-supported ceria gains visible-light activity through a mixed-metal-oxide interface mechanism. We are interested in applying spatially-resolved EELS to characterize this critical interface and its effects on water splitting.