In an effort to understand fundamental materials phenomena which govern the behavior of SOFCs, we utilize high resolution imaging and nanospectroscopy in the electron microcsope coupled with simulations to correlate micro- and nano-scale structure and chemistry with electrical properties of ceria-based solid electrolytes. 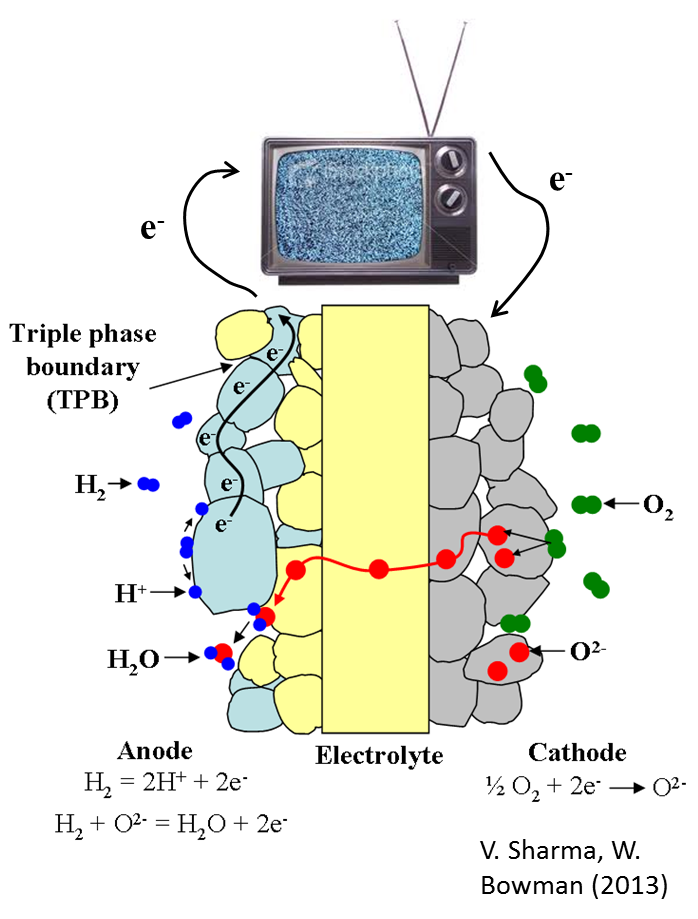 The diagram to the right illustrates the SOFC operating principles. Oxygen molecules (O2) are reduced by electrons (e-) at the cathode to form oxygen ions (O2-), which then diffuse through the electrolyte to the anode where they participate in the oxidation of fuel molecules at triple phase boundaries. Hydrogen gas (H2) is shown as the fuel in this diagram; however, an attractive feature of the SOFC is its ability to utilize a diverse fuel stream including hydrocarbon fuels such as methane, the chief component in natural gas.

All material synthesis is performed in house using an inexpensive and relatively simple synthesis technique called spray drying. By this method an aqueous solution is sprayed as a fine mist into a reaction vessel where it is introduced to a stream of heated air. The water rapidly evaporates producing powders which are compositionally mixed at the nanometer scale. Below is a diagram of the spray drying apparatus used in our lab. 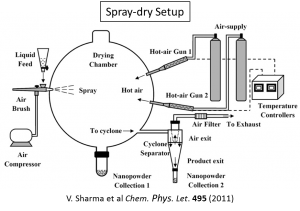 We prepare all electrolytes from powders synthesized in house. We characterize the electrical properties of these electrolytes using AC-impedance spectroscopy performed in air at temperatures up to 1000°C. This technique allows us to determine the unique contributions of grains and grain boundaries to the overall conductivity of the electrolyte – an important capability when considering the effects of highly localized structural and compositional features. 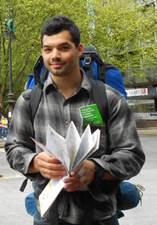 William Bowman graduated with a Materials Science and Engineering Ph.D. in 2016 . He received his bachelors in the same field from Arizona State University in 2012.